Crowdfunding Fails To Take Off In Hong Kong

In recent years, crowdfunding has emerged as a popular way for individuals, startups and businesses to raise funding from a global audience of investors.

Crowdfunding refers to the practice of funding a project or venture by raising money from a large number of people. Crowdfunding includes peer-to-peer lending, crowdinvesting, reward-based crowdfunding and crowddonating, as well as invoice trading.

For small and medium enterprises (SMEs), peer-to-peer lending and overall alternative financing has become a way for those with difficulty accessing credit from conventional banks to keep their businesses afloat.

To boost crowdfunding, most jurisdictions around the world have enacted specific legislations governing the practice. However, despite the fact that Hong Kong is one of the major global financial hubs in the world, no clear guidelines or specific regulatory regime has been issued by the government yet.

At present, Hong Kong doesn’t have a single and comprehensive piece of legislation that deals specifically with crowdfunding. Instead, crowdfunding is regulated separately by different existing laws such as the Securities and Futures Ordinance, the Money Lenders Ordinance and the Companies Ordinance.

Many experts and industry observers have argued that the government’s inactivity has hindered the development of the space.

“What the administration should do immediately is to strike a reasonable balance between financial innovation and protection for small individual investors and then draw up new legislation to regulate crowdfunding as soon as possible,” Kenneth Leung Kai-cheong, a member of the Legislative Council of the Hong Kong Special Administration Region, wrote in a post.

“The new law should fulfill the function of facilitating the healthy development of crowdfunding on one hand, and safeguarding the interests of small investors on the other.

“In fact, one of the main reasons crowdfunding is not popular among startups and investors in Hong Kong is that our existing laws are simply too strict.”

While crowdfunding activities have surged in nearly all developed countries around the world, Hong Kong has been lagging behind other major financial centers in terms of volume.

According to a paper by the Hong Kong Legislative Council, Hong Kong only raised US$9.3 million through crowdfunding in 2015. The number is tiny when compared with the US with US$28.4 billion, Britain with US$4.33 billion, Japan with US$360 million and Australia with US$240 million. 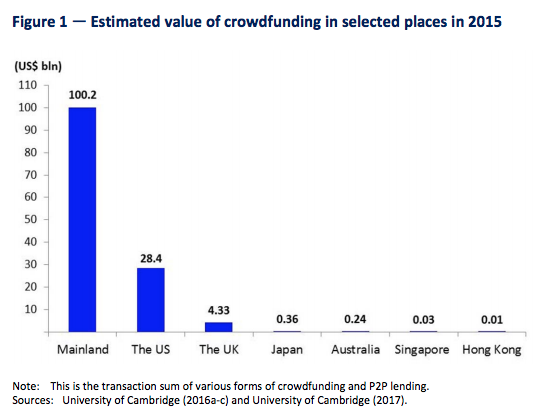 Leung argued that in order to boost the healthy development of crowdfunding, the government “must eliminate grey areas and vagueness in our law regarding this new breed of capital-raising tool in the short run, and establish a proper but relatively relaxed regulatory framework in the long run.”

He advised for the creation a new framework that’s flexible. For instance, the administration could consider exempting crowdfunding initiatives that involve less than HK$20 million from certain requirements.

The Hong Kong crowdfunding industry is still limited and, as of today, only one firm has managed to grow to considerable size. 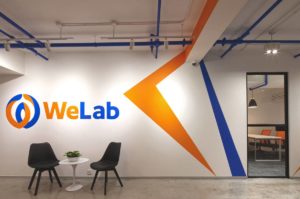 One of the most recent platforms is MoneySQ. The company announced an allegiance with asset management firm Bridgeway Prime Shop Fund Management Ltd in 2016 to create the online lending service and the city’s “first investment platform designed for professional investors.”

Another platform is Lifewire, the very first crowdfunding platform for healthcare in Hong Kong. The platform brings together patients, charities, donors, and medical experts into a tightly-knit community. Anyone can donate as little as HK$30 or by simply spreading the word through social media and help a family afford medical care.

Music Bee is a crowdfunding platform focused on independent music that lets music artists to have their songs and albums crowdfunded. The company claims its mission is to help bring independent music projects into life, providing musicians with opportunities. Examples of successful projects backed include Chet Lam’s new album, which received almost HK$400,000 after listing on the platform.