Banks in China Are Increasingly Partnering with BigTechs

2019 has been undeniably the year of Chinese commercial banks/tech companies collaborations.

Incumbents have been actively pursuing partnerships with tech firms to drive fintech adoption as part of their digital strategies. Meanwhile, Chinese Internet giants have begun shifting their focus from being financial services providers to being tech providers.

According to an analysis by Chinabankingnews.com, at least ten commercial banks in China have inked partnership deals with tech or fintech companies since the beginning of the year. 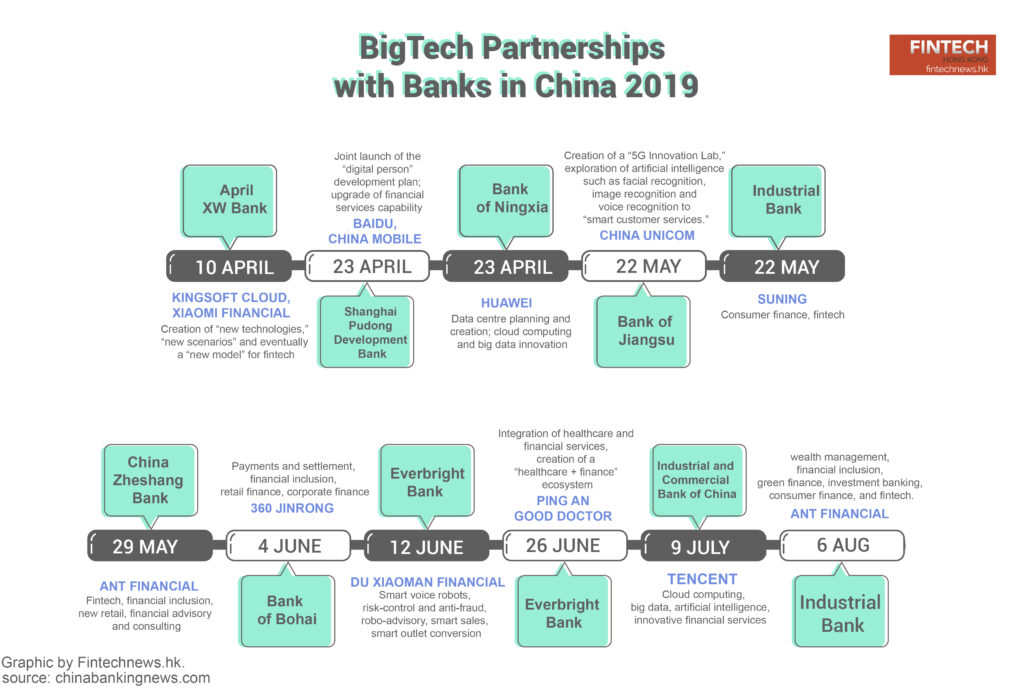 The latest to have done so is Industrial Bank, which unveiled on August 6, a strategic cooperative agreement with Ant Financial, the financial affiliate of e-commerce giant Alibaba. The partnership focuses on the areas of wealth management, financial inclusion, green finance, investment banking, consumer finance, and fintech.

Two other partnerships were unveiled in June: the collaboration between Bank of Bohai and 360 Jinrong on areas including payments and settlement, financial inclusion, retail finance and corporate finance; and the partnership between Chinese fintech Pintec Technology and Bank of Ganzhou to establish a new fintech research and development center focusing on advanced fintech researches in big data, cloud computing, AI, financial security, and blockchain.

May saw three collaborations announced. China Zheshang Bank partnered with Ant Financial on fintech, financial inclusion, new retail, and financial advisory and consulting, while Industrial Bank teamed up with Suning on consumer and fintech. Bank of Jiangsu unveiled a collaboration with China Unicom to create a “5G Innovation Lab,” as well as explore AI applications such as facial recognition, image recognition and voice recognition for “smart customer services.”

On April, Bank of Ningxia partnered with Huawei on the creation of a data center, as well as cloud computing and big data innovation. Shanghai Pudong Development Bank teamed up with Baidu and China Mobile to launch the “digital person” development plan and upgrade financial services capabilities. Finally, XW Bank announced a partnership with Kingsoft Cloud and Xiaomi Financial to create “new technologies,” “new scenarios” and eventually a “new model” for fintech.

That same month, Tencent announced two partnerships with two banks. The first collaboration, unveiled on April 2, is with Bank of Gansu and focuses on establishing an online loan management platform including improved marketing tools and risk controls.

The second partnership, announced on April 3, involves forming a new fintech laboratory focused on research and development (R&D) in AI, data analysis, and cloud computing in collaboration with China Construction Bank (CCB), one of the four biggest state-owned commercial banks.

Another partnership unveiled in April is the collaboration between Nasdaq-listed Lexin and 19 banks and consumer finance companies including ICBC, China Minsheng Bank and Bank of Tianjin to help match borrowers with creditors in real time.

Alibaba and Tencent among The First To Receive China’s Cryptocurrency, Sources Say

Shenzhen Has Issued 6 Million Blockchain Invoices in a Year