BITOCEAN (株式会社BITOCEAN) was the last exchange approved by the FSA, on December 26, 2017.

Since the Coincheck hack in January 2018, all FSA personnel have been focused on strengthening the control infrastructure of existing exchanges and pending applicants, with a number of business suspension and business improvements orders issued (detailed below). 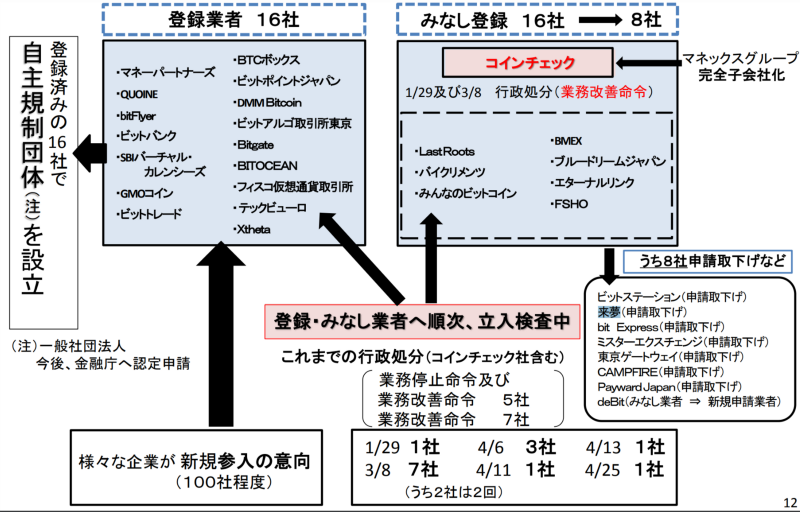 As published by the Japan Financial Supervisory Agency (FSA) on April 27, 2018

Any exchange already operating at the time of the new regulation coming into effect on April 1, 2017, was allowed to continue their business, but had to file a crypto exchange application by September 30, 2017. Coincheck was among that group. It has been subsequently acquired by Monex Group on April 6, 2018, for a reported JPY 3.6bn.

The other 7 crypto exchanges with pending applications are Blue Dream Japan, Bmex Corporation, Eternal Link, FSHO Corporation, Lastroots Corporation, Lemuria Bitcoin Exchange (Bicrements), and Minnano Bitcoin. Some of these have business suspension and/or business improvement orders against them, as detailed below.

Out of the original 16 pending applications, 8 have withdrawn as they do not wish to comply with the stricter (or in fact, enforced) regulation, which are Bit Station, Bitexpress Corporation, Campfire Corporation, deBit, Kurumu Corporation, Mr. Exchange, Payward Japan, and Tokyo Gateway. Apparently, deBit has re-filed its application.

Since January, the word on the street has been that there have been more than 100 applications filed that are still awaiting processing. There was a surge in application files after China banned all crypto exchanges, and that number has held steady despite the warning issued against Binance on March 23, 2018, after which that exchange decided to move on to lighter regulatory pastures. Industry experts expect that processing of these applications will take us far into 2019.

A total of 12 companies have been sanctioned, with Coincheck and FSHO having received the honor twice.

The following crypto exchanges only received a business improvement order:

This article first appeared on medium.com

Passionate about strategy & innovation in Japan. Connector of people & ideas.

Fintech Accelerators and Incubators in Taiwan, Japan and South Korea

Facebook’s Libra Will Not Include China’s Yuan