Digital trade finance platforms, digital and cryptocurrencies, cross-border payments and a vision for Hong Kong fintech all figured strongly on the opening day of Hong Kong Fintech Week at the AsiaWorld-Expo, when the news flow was led by regulatory announcements, all ground-breaking, all pointing to a stronger Hong Kong fintech ecosystem in years to come.

Looking to the future and in one of the highlights of the day, it was hats off to sync., billed as the world’s first smart bank. Sync. was announced as the winner of the inaugural FintechHK Global Competition, organised by Alibaba Entrepreneurs Fund and Invest Hong Kong, earning it an investment commitment worth up to half a million US dollars. 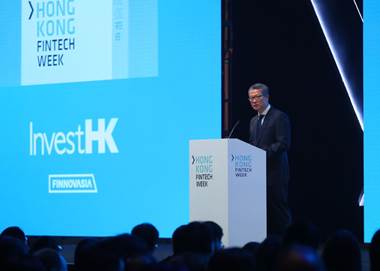 Hong Kong SAR Financial Secretary, Mr. Paul Chan, started proceedings on the Global Stage with a welcome. He highlighted the virtual banks and open APIs, launched by 20 retail banks, as game-changers. While acknowledging Hong Kong’s current challenges, he emphasised the competitiveness of the city, the commitment to the dollar peg and free flow of capital. He added that Hong Kong and Shenzhen work together – they are not rivals – in order to drive fintech for the Greater Bay Area’s 71 million consumers. 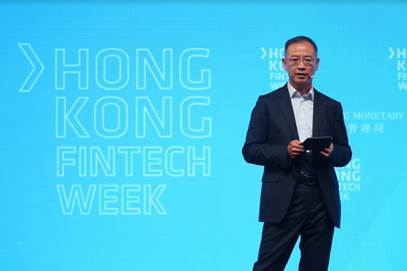 Chief Executive of the Hong Kong Monetary Authority (HKMA), Mr. Eddie Yue, looked at recent fintech achievements in Hong Kong, such as open APIs, virtual banks and greater use of Distributed Ledger Technology (DLT), which he tied into future developments – what’s in the pipeline.

He noted that a new HKMA research, released Wednesday, shows one key finding that “almost 90% of our retail banks have already implemented, or are planning to implement, AI (artificial intelligence) in their business applications.” He added that AI does, however, pose questions on oversight and accountability, and could lead to ethical or other issues.

With regard to risk management and KYC, and possibly with an eye to potential subject matter for next year’s Fintech Week, Mr. Yue said the government plans to roll out its electronic ID initiative, “iAM Smart”, in the fourth quarter of next year. This service will enable Hong Kong citizens to authenticate their identity using their mobile phone.

The HKMA made several significant announcements. 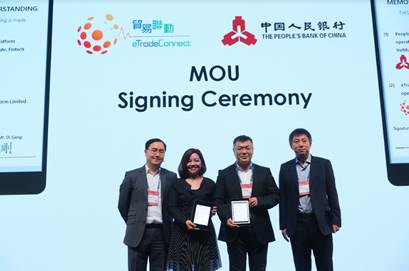 A Memorandum of Understanding (MoU) for blockchain collaboration was signed between the subsidiaries of Hong Kong Interbank Clearing Limited and Institute of Digital Currency of the People’s Bank of China (PBoC) to conduct a Proof-of-Concept (PoC) trial, which aims to connect eTradeConnect and the PBoC Trade Finance Platform. The PoC is expected to begin in Q1 2020. This will provide more convenient trade finance services, helping banks in Hong Kong to expedite the expansion of their trade finance business.

As a testament to Hong Kong’s importance as a financial and fintech innovation hub, the HKMA announced that the Bank of International Settlements (BIS) Innovation Hub Hong Kong Centre commenced operations this month. The HKMA believes that the Innovation Hub Hong Kong Centre will serve as a focal point for regional fintech collaboration. Initially, the HKMA will explore with it the use of DLT to digitalise trade finance processes and study the impact of big tech on financial markets.

A joint research project between the HKMA and the Bank of Thailand, called Project LionRock-Inthanon, was announced. The purpose is to study the application of Central Bank Digital Currency to cross-border payments, with a view to facilitating HKD-THB payment-versus-payment among banks in Hong Kong and Thailand. A joint report is scheduled for release in Q1 2020. 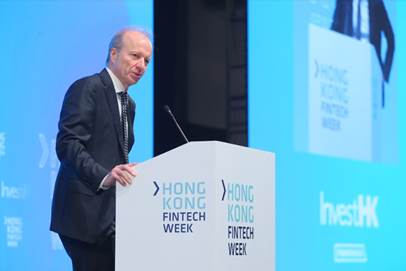 The regulators were out in force today and delegates were able to hear Ashley Alder, Chief Executive Officer of Hong Kong’s Securities and Futures Commission (SFC), pick up where he left off last year on the subject of digital assets. Same subject, yes; but a very different context and line of thinking.

“In 2018, the crypto world was seen to be of marginal importance to the global financial system,” Mr. Alder, adding that the G20’s Financial Stability Board concluded last year that blockchain “currencies” were problematic from an investor protection angle, but they did not yet pose any significant financial stability risks. “Then came Facebook’s Libra, and the international regulatory community had to get its act together very rapidly.”

Mr. Alder noted that many regulators are also concerned about financial services that are outsourced to a small number of “big tech” companies. “On top of this, data privacy issues are looming ever larger. As are fundamental questions about how to regulate conduct in financial services when machines, not humans, make decisions.”

“The Libra project has galvanised regulators across the world to look far harder at the opportunities and risks inherent in virtual assets,” said Mr. Alder. “This is a significant change from the more relaxed attitude only last year.”

“After an in-depth examination of their unique technical and operational features, we concluded that some could be regulated by us,” Alder said. The new rules draw on the standards the SFC expects for conventional securities brokers. They stipulate that to get a license exchanges can only serve professional investors, and insurance to protect clients in case assets are lost or stolen. They must also use an external market surveillance mechanism.

Cryptocurrency exchanges do not need an SFC license to operate provided they do not trade any products defined as a security. Bitcoin for example is not a security, Alder said. He also warned about the risks of buying bitcoin futures in Hong Kong.

The new regulatory framework is a major development, he said. “It draws heavily on the standards which we expect of conventional securities brokers and automated trading systems. But it also adapts those standards to deal specifically with the technology on which the industry is based,” said Mr. Alder. “Our new regulatory framework covers all of the key investor protection concerns, including the safe custody of assets, know-your-client requirements, anti-money laundering and market manipulation.”

Away from the Global Stage, there was plenty of action.

On the Growth Stage, the main theme on payments and remittances inevitably covered emerging markets in the region, where many Asians are underserved by financial services companies, creating an opportunity for fintech companies. 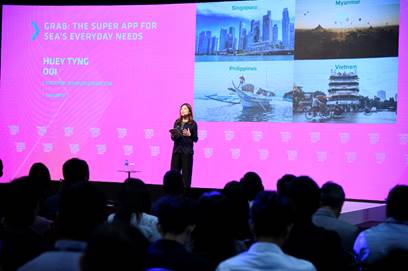 Regional Managing Director of GrabPay, Huey Tyng Ooi, noted that more than 70% of Asians are underbanked and underserved. She said that GrabPay is striving to make peoples’ lives better by providing driver-partners with accessible microloans, insurance and, in the pipeline, wealth products. 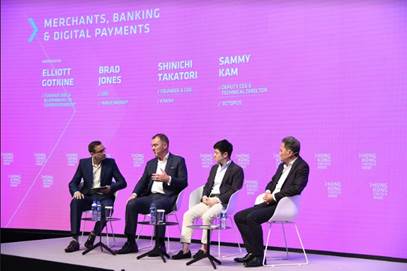 Turning to Myanmar, Wave Money CEO Brad Jones said that because of its turbulent history, it is difficult to build trust in financial institutions in the country. Yet, Wave Money has seen mobile payments grow from 0.8% of all transactions in March 2016 to 91% in August 2019.

“To wave your money is now a verb!” he said, adding that 80% of its agents are female with the highest earners making US$4,000/US$5,000 a month, which is helping to close the gender pay gap. 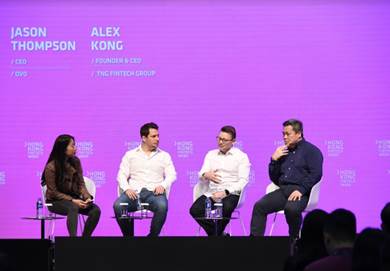 CEO of digital payment firm and Indonesian unicorn OVO, Jason Thompson, spoke about the country’s young population, and how friendly government policies are driving growth. He said the app is now on 150 million devices.

On the Hong Kong Stage, the first session looked at how fintech facilitates small and medium enterprises (SMEs). A panel discussed how despite SMEs making up 80% of businesses in Hong Kong, they are hugely underserved by the traditional banking industry because they often don’t meet bank requirements. 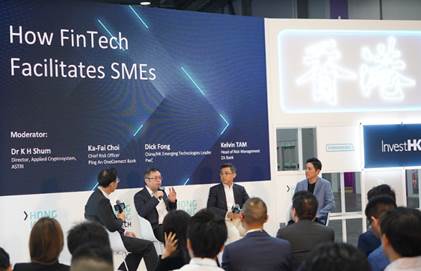 Fintech will change that, said Ka-Fei Choi, Chief Risk Officer at Ping An OneConnect Bank. He said that alternative data from e-commerce platforms can show how trustworthy a vendor is when applying for loans. 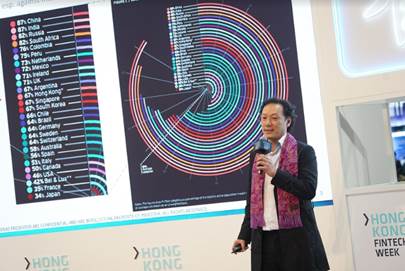 It was a point echoed by InvestHK Head of Fintech King Leung who in a keynote about the Hong Kong fintech ecosystem, described the issuance of eight virtual banking licenses as “game-changing” and something that “could severely disrupt traditional banking in Hong Kong.” He added that Hong Kong consumers are ready for it, with 67% adopting new technologies. 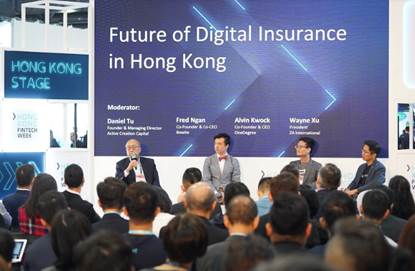 On the same theme, but in the context of insurance, Fred Ngan, Co-Founder and Co-CEO of Bowtie, Hong Kong’s first virtual insurer, said that insurance is ripe for transformation. He added that in Hong Kong, 99% of sales come from agents or brokers, meaning that lots of people are either under-insured and under-served. He added that by offering easily accessible online services, virtual insurers can help to overcome financial exclusion.

Over on the Future Stage, the conversation was more focused on future technologies. Various speakers and panel lists shared their thoughts. 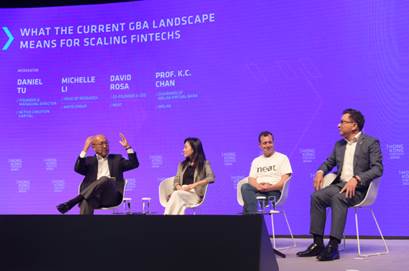 On the subject of the Greater Bay Area as means to scale fintech, all speakers on a panel agreed that when “scaling up” for fintech growth, it is imperative that businesses engage Chinese markets. Professor K.C. Chan, Chairman of WeLab virtual bank, said the Hong Kong market was considered too small for fintech development in Hong Kong, so the GBA will help address the size issue. 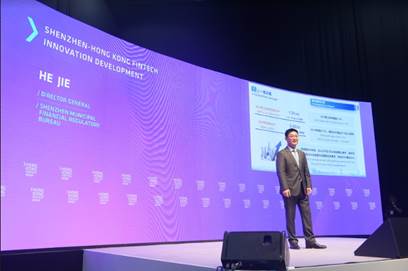 Commenting on Shenzhen and Hong Kong, He Jie, Director General, Shenzhen Municipal Financial Regulatory Bureau, said: “Looking to the future of Shenzhen-Hong Kong projects, there are a lot of areas to work together.” In his keynote, he discussed generally the cooperative nature between Hong Kong and Shenzhen, the healthy technological ecosystem that is developing, primarily mentioning Hong Kong as having advantages in governance. 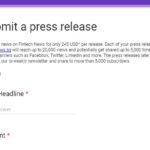 The Case for Robo-Advisory and Digital Wealth