When talking to South Koreans, the word “blockchain” has become a household buzzword. Most people have heard of it via the mainstream local media, especially when there was a massive fervor around bitcoin and cryptocurrencies towards the end of 2017.

Thus, they turned towards cryptocurrencies as a way to “get rich quick” as people started to hear about how others received hefty profits on their Bitcoin and Ethereum investments. What followed was the start of a worldwide cryptocurrency bear market that has persisted until today.

Despite that Korea is quickly shaping up to be a region to watch when it comes to blockchain, here are some reasons why.

The South Korean government continues to be pro-blockchain development to this day. The government is always on the lookout for the next economic drivers to stay nationally competitive in different industries.

In a report by the Korea Economic Daily, the South Korean government has set aside $35 million to develop domestic blockchain-based industries this year.

The southern island of Jeju has also come into the blockchain foray with ambitions of becoming an “Asian Malta.”

According to the Korea Joongang Daily, the governor of Jeju Island wants to create a special economic zone to nurture blockchain and cryptocurrency projects with clear deregulation measures.

This would potentially lead to an inflow of foreign talents to Korea to base their projects while also keeping domestic talents from leaving abroad due to regulatory constraints.

Initial coin offerings (ICOs) and security token offerings (STOs) would be allowed under the proposals set forth. Many blockchain industry insiders are predicting that the next cryptocurrency bull run will be sparked by institutional capital inflows into security tokens. 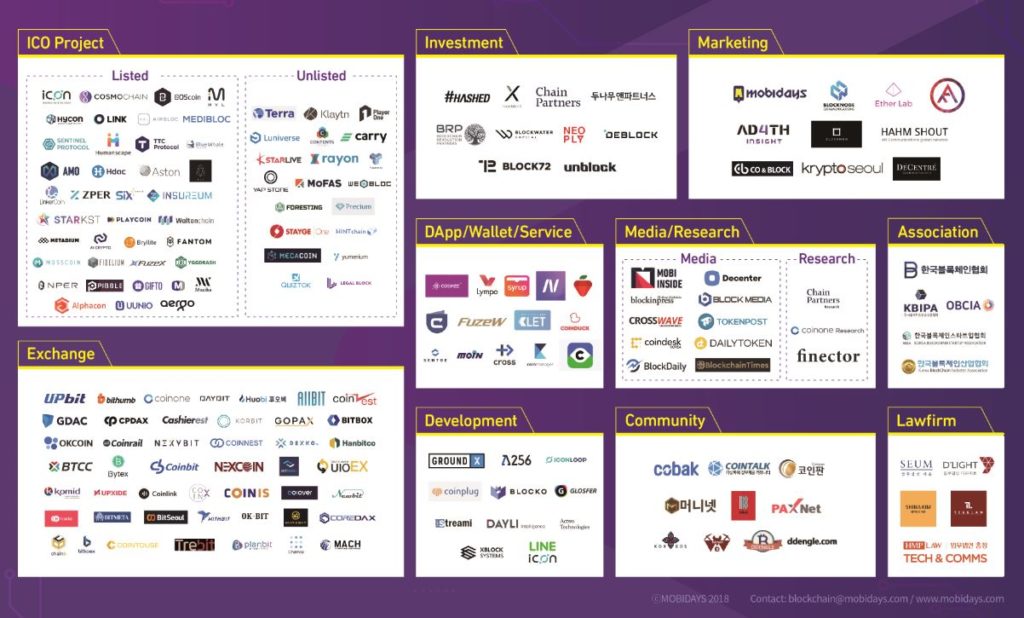 A Strong Foundation of Blockchain Companies

Some of the most interesting developments in Korea’s blockchain industry focus on protocol development, namely smart contract platforms.

ICON with backing from Dayli Financial Group and the advisory services of Don Tapscott has the biggest brand name recognition. They have garnered partnerships with leading domestic universities, insurance firms, and hospitals to integrate data onto their main net blockchain.

Blocko is a startup enterprise focused on offering permissioned, enterprise blockchain services for digital identity and payments with a software solution called “Coinstack.” They have received investment from major local conglomerates such as Samsung Venture Investment and POSCO in Series A and B funding rounds.

Kakao Talk, the company behind the most widely used messaging app in Korea, is also developing their own blockchain platform called Klaytn through their blockchain business subsidiary, Ground X.

According to Simon Kim, founding partner of Korea’s largest crypto fund #Hashed, the moment Kakao Talk starts offering cryptocurrencies and wallets to almost every Korean via smartphones will be a game changer.

Aergo, TTC Protocol, Contents Protocol, Terra, and Carry are some of the other hyped blockchain projects with ties to global crypto institutional funds such as FBG Capital and DHVC.

On the exchange front, Bithumb and Upbit lead the market in terms of daily trading volume and users.

Upbit through its affiliation with Kakao Talk has built a strong brand name for security services and a wide range of cryptocurrency offerings. User experience and interface is also clean and simple.

Korbit, Coinone, and Gopax are in the next tier of exchanges with significantly less trading volume but with solid security and analytical services.

Big name exchanges from abroad such as Huobi and BTCC have also set up business operations in Korea but with less users.

Throughout 2017, Korea played host to a number of international blockchain conferences almost every month. Local meetups were held almost every week with bigger name projects such as Ripple, EOS, NEO, Bitcoin Cash and smaller ICO projects.

As reported by Fintech Singapore, a new blockchain café even opened up in Seoul.

Beyond Blocks Seoul in July 2017 was the highlight international blockchain conference with Mike Novogratz, Ran Neuner of CNBC Africa, Mike Arrington of XRP Capital, and other significant blockchain industry stakeholders from all over attending.

To this day, Korea continues to host blockchain conferences and developer meetups in Seoul and local communities.

While the excitement from small retail investors has abated considerably, blockchain-based companies in Korea are still hiring and receiving investment from venture capital funds, albeit less than the heyday of 2017.