While China’s fintech industry had been mostly driven by the “fin” component, the importance of the “tech” component will come to the fore in the future, according to management consulting firm Oliver Wyman.

With the ongoing integration of fintech into the regulatory framework, the development of fintech in China has reached an inflexion point. From now, technology will be the key driver of value-chain disruption in an increasingly data-driven industry, claims a new report titled “Fintech in China: hitting the moving target.”

This comes at a time when China’s fintech industry is facing new challenges as government regulation begins to increase and threaten to curb the growth of startups.

China’s fintech sector has attracted US$6.4 billion in investment in 2016 alone, representing 47% of global fintech investments. Chinese fintech leaders have grown “opportunistically” by fulfilling demand unmet by the traditional banking and financial sector.

In particular, several segments of the fintech market including peer-to-peer lending, online wealth management, insurtech and third-party payment, have on average doubled or even tripled yearly. 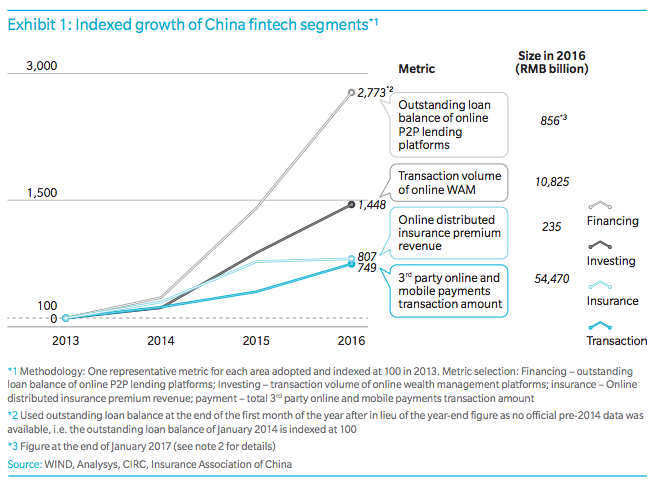 But according to Cliff Sheng, a partner at Oliver Wyman and an author of the report, despite the impressive growth, not all players are truly “fintech” in nature.

“Some of their business models merely represented a shift of channels from offline to online without true technology innovation,” Sheng said.

“By using the ‘fintech’ label, these entities have been less regulated and grown rapidly by leveraging such arbitrage to offer products that were stringently regulated in the traditional financial services system. Tightening regulations are now curtailing this approach.”

The unregulated growth has led to several high-profile scandals. Since 2014, China has witnessed a soaring number of closures by peer-to-peer lending platforms with billions being taken away. According to Wangdaizhijia.com, an independent information portal for online peer-to-peer lending, over 60% of all platforms that ever existed are estimated to have ceased operations.

These incidents created growing concerns over the legitimacy of fintech and prompted policymakers to incorporate fintech into the regulatory framework. Several rulings were released in 2016 with the aim of tackling fraud, ensuring product appropriateness, and protecting vulnerable types of customer. 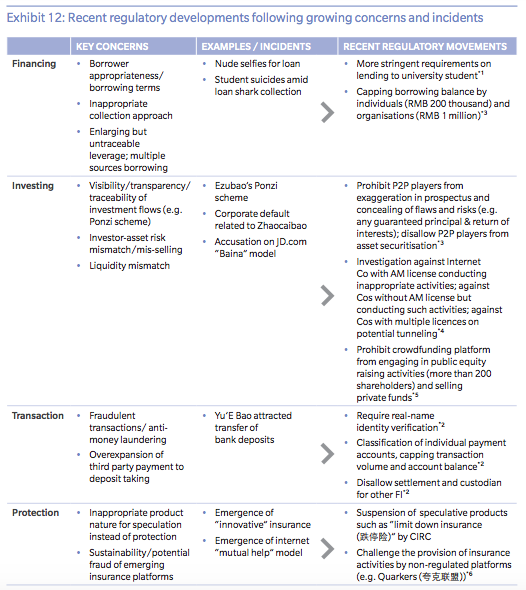 Big Data analytics, the Internet-of-Things (IoT) and blockchain are set to be the three major technologies that will drive the next wave of growth for China’s fintech industry.

According to the report, China’s future fintech winners will use data effectively to expand and better serve customers. Adopting data aggregation and analysis techniques will facilitate their understanding of the market and customers by building know-your-product and know-your-customer capabilities. It will also help them support the development of more-innovative products and dynamic pricing. Moreover, Big Data analytics enables the automation of decision-making processes and reduces labor costs.

By leveraging IoT, future winners will provide tailored pricing with better risk assessment and targeted marketing through new channels such as mobile and wearable devices.

They will enhance insurance product design, underwriting, and pricing to better fulfill the growing needs of the insurance sector. Insurance enabled by technology is still nascent, with gross written premiums amounting to only about CNY 40 billion (US$4.9 billion) today. The report estimates this number could increase by 10 times to CNY 400 billion (US$49 billion) by 2020.

In addition, future winners will develop blockchain-enabled transaction infrastructure that tackles current inefficiencies. Blockchain technology will enhance the exchange of information by being the bedrock of a safer, faster transaction architecture for the financial industry.

“The fintech landscape in China is moving fast, only those who weigh it right would be able to hit the bullseye,” the report says. It concludes:

“The future winners will be those that are able to find the right strategy for their relative strengths and weaknesses, and that overcome the key challenges during execution.”