The Greater Bay Area is Home to 43 Unicorns Valued at a Combined US$1.1 Trillion

The Guangdong-Hong Kong-Macau Greater Bay Area (GBA) is home to 43 unicorns valued at a combined US$1.1 trillion. These unicorn focus on five key industries: e-commerce, healthtech, robotics, fintech and biotech, according to a new whitepaper by WHub, Hong Kong’s startup platform and community.

In the paper, WHub sheds light on the tech and startup ecosystem in the GBA, highlighting the area’s most successful startups as well as the rising stars.

The GBA’s most successful startups

According to the report, WeBank (US$18.5 billion), China’s first digital bank backed by Tencent, is the GBA’s third highest valued startup and the only fintech in the top five. 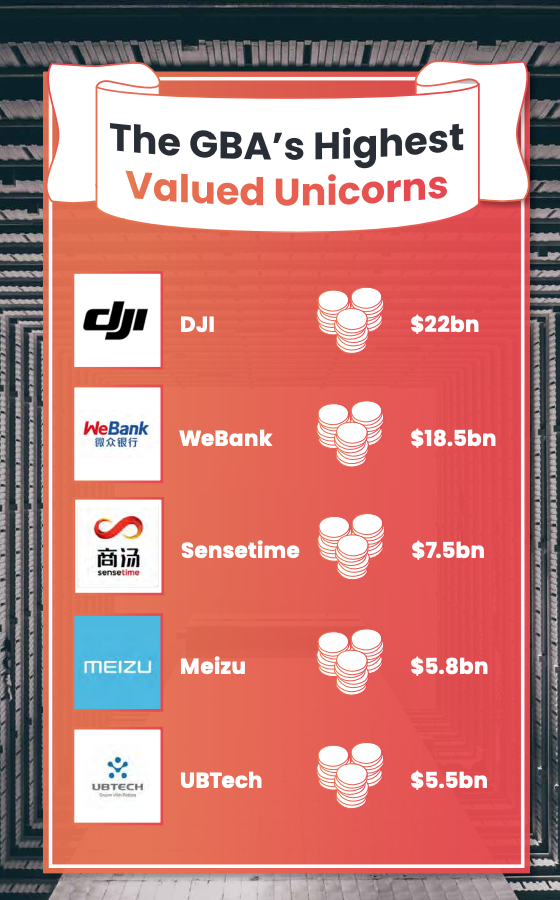 Besides WeBank, the area is also home to several other fintechs. These include WeLab (Hong Kong), a fintech specializing in lending that has just been granted a virtual banking license; BitMex (Hong Kong), a major player in digital currency exchange platforms; TNG Wallet (Hong Kong), a digital wallet company who is currently embroiled in a legal tussle; Airwallex (Hong Kong), which provides foreign exchange (forex) cross-border payment solutions for businesses; and Tuandai (Dongguan), a peer-to-peer (P2P) lending company.

The report also points out Shenzhen’s key role in the area’s technology landscape. 25 out of the GBA’s 43 unicorns are located in Shenzhen, and half of patents filed in China are from Shenzhen.

A Special Economic Zone, Shenzhen has successfully transitioned from an industrial to a service-oriented city and technology hub, and stands today as base for research and development (R&D), being home to over 80 universities with over one million college students, and more than 10,000 high-tech enterprises.

After Shenzhen, it is Hong Kong that’s home to the most unicorns in the region with eight, followed with Guangzhou with seven, the report says.

Besides its unicorn startups, the GBA is also home to several rising fintech stars to watch out for.

The GBA is a megalopolis, also known as the Pearl River Delta, consisting of nine cities and two special administrative regions in south China. The GBA is the 12th largest economic entity in the world and currently the largest bay area in the world in terms of land size and population.

Though the GBA only accounts for 0.6% of China’s land and 5% of the population, it accounts for 12% of the country’s GDP. According to a Colliers research, the GBA economy is set to more than double by 2030 and reach US$3.6 trillion, making it, economically, the largest bay area in the world. 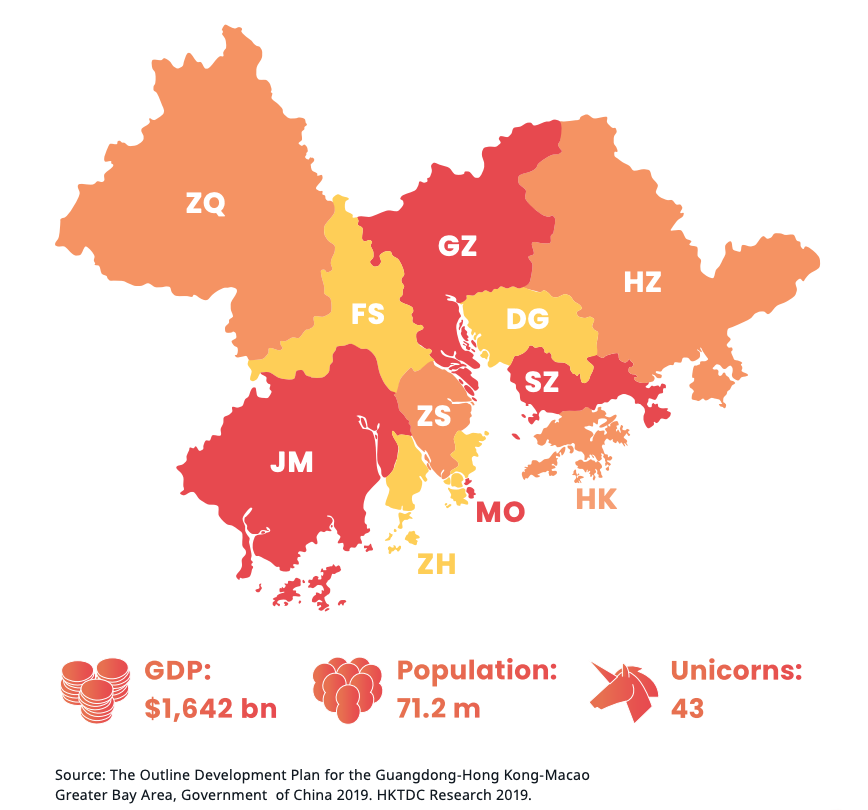 The GBA Initiative is a plan by the Chinese government that aims to develop the area into one of the five key clusters across Greater China, along with the Yangtze River delta, Jing-Jin-Ji area, Mid-Yangtze River area, and the Chengdu-Chongqing Area.

In the plan, the GBA is set to be placed as a “buckle” in the Belt and Road Initiative, connecting countries along the 21st Century Maritime Silk Road.

First proposed in 2013, the Belt and Road Initiative is a Chinese strategic initiative to increase investment and foster collaboration across the historic Silk Road. The strategy involves infrastructure development and investments in 152 countries and international organizations in Asia, Europe, Africa, the Middle East, and the Americas.

The project has a targeted completion date of 2049, which coincides with the 100th anniversary of the People’s Republic of China.

Once Notorious for Copying, China’s Tech Giants Are Now Being Copied by the West